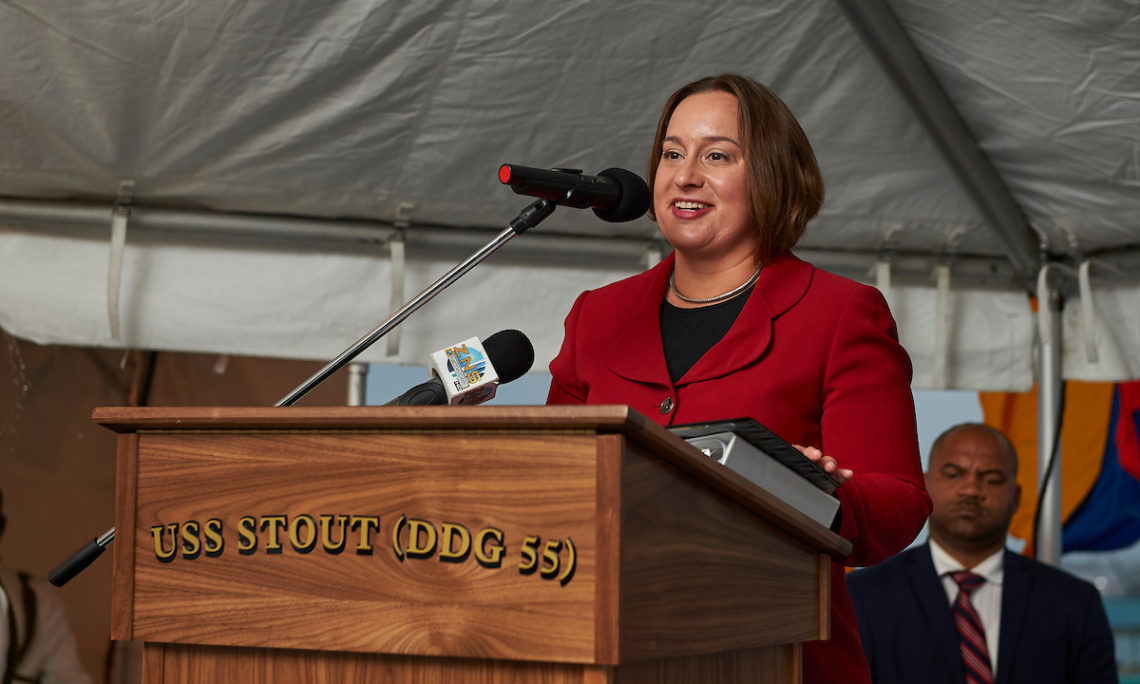 Ladies and gentlemen, friends, good evening.  I stand on the protocol that has already been established, however, I wish to acknowledge Admiral Christopher Grady and Mrs. Grady, Honorable Cabinet Ministers, Minister Dames, Honorable Senators, Heads of Diplomatic Missions, Commdore Bethel, and our Mission Partners.

It is such an honor to be aboard the USS STOUT this evening.  My sincerest thanks to Commander Nathan Diaz and the brave women and men of the STOUT for hosting us.  You have truly outdone yourselves in preparing for this wonderful event.

Given that we recently commemorated the 75th anniversary of D-Day, I think it is important to remember the man after which this ship is named.  Lieutenant Commander Stout was in command of the destroyer minelayer USS

BREESE when, docked at Pearl Harbor, the Japanese attacked on December 7, 1941.  During the attack, guns from USS BREESE shot down one enemy bomber.  Subsequently, USS BREESE put to sea and participated in a depth-charge attack on a midget submarine.  Commander Stout went on to command the destroyer USS CLAXTON and Destroyer Division Ten, earning the Silver Star Medal for conspicuous gallantry and intrepidity in action against enemy Japanese forces in Ormoc Bay, Leyte, Philippine Islands.

I would also like to acknowledge and thank Admiral Grady and his wife Christine for being here.  As the Commander of U.S. Naval Forces Northern Command, Admiral Grady plays a critical role in our relationship with the Royal Bahamas Defence Force.

Thank you Admiral Grady for your continued efforts to partner with the RBDF in key areas such as maritime domain awareness, military intelligence, and development of the operations center in Coral Harbour.

Our joint efforts result in greater security and safety here in The Bahamas.  Since last October, the beginning of the U.S. Fiscal Year, our joint efforts have led to 25 successful interdictions of both cocaine and marijuana, resulting in the confiscation of over 490,000 pounds of marijuana and almost 500 kilos of cocaine – representing a street value of over $505,000,000 dollars.

During that same time, our joint forces interdicted 41 migrant sea vessels, resulting in the repatriation of over 1,700 illegal migrants.

Yet we know we still have work to do.  In April, we inaugurated the maritime surveillance radar on the island of Great Inagua.  Within the next year, a second radar will be installed at the Coral Harbour base here on New Providence.  Today, I am happy to announce that we just received approval to fund a third radar, which will be installed on Great Exuma.

Once installed and operational, these radars will significantly enhance the ability to monitor illicit traffic transiting through Bahamian waters.

Additionally, together we have installed Over The Horizon Target Tracking Systems aboard all of the RBDF patrol and interdiction vessels.  As the name implies, these systems will allow the RBDF to target illicit activity significant distances from shore and will play an instrumental role in RBDF efforts to decentralize their forces across the archipelago.

These major investments in our partnership will contribute to the security of the southern approaches to both our nations and demonstrate our unwavering resolve to advance U.S. and Bahamian interests.

On an equally important note, I am happy to know that the sailors of the STOUT and Marines of the RBDF continued a long-standing tradition of giving back to the community.  Yesterday and earlier today, volunteers from the STOUT and the RBDF visited the Simpson Penn Centre for Boys and Willie Mae Pratt Centre for Girls for outreach and sports activities.

I am always deeply humbled by the sacrifices of those who choose to wear a uniform and even more so when they give their time back to the community.  I would specifically like to thank Mrs. Grady for your time at the Pratt Centre today and for the donation of some much-needed items for the girls.  Thank you to all those that participated.

In closing, I would like to thank all the women and men of the USS STOUT for your continued service to our country.  Welcome to The Bahamas.  Enjoy the remainder of your stay in this beautiful country.