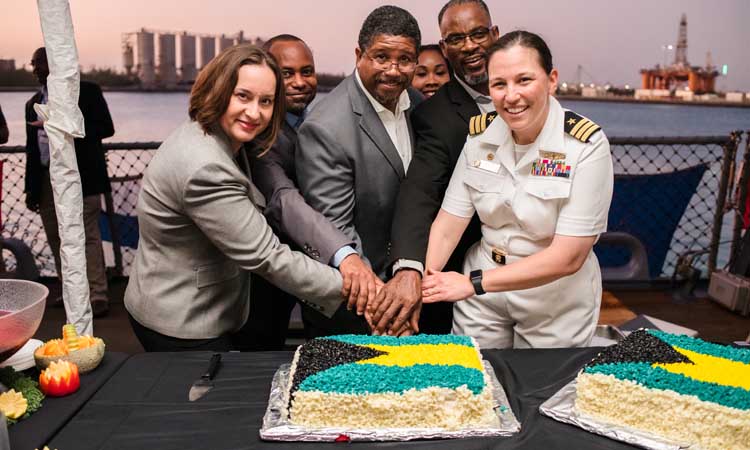 On February 13, U.S. Chargé d’Affaires Stephanie Bowers and Commanding Officer of the USS BAINBRIDGE Commander Kathryn Devine cohosted a reception aboard the naval ship while docked at the Freeport Harbour.  Among the guests were Deputy Prime Minister and Minister of Finance Peter Turnquest, Minister of State for Grand Bahama Senator Kwasi Thompson, and the Minister of State for Disaster Preparedness, Management and Reconstruction, Iram Lewis.

Commander Devine said the visit to Grand Bahama helped strengthen the U.S. partnership with the Bahamian people.  Chargé Bowers noted the USS Bainbridge’s visit, like the visit of her sister ships before her, is further testament to the strength of the bilateral relationship between the United States and The Bahamas, and to the historically close economic, cultural, and social ties.  The Chargé added it was fitting that the first visit by a U.S. Navy ship to The Bahamas since the immediate aftermath of Hurricane Dorian occurred in Freeport.  She highlighted that even in the midst of hardship and tragedy, and working closely to rescue storm victims and begin the long, painful process of recovery, the United States and The Bahamas emerged with an even stronger friendship.

While in port thirty volunteers from the USS BAINBRIDGE participated in several community outreach projects at primary schools in Freeport and Eight Mile Rock which included painting classrooms damaged by Hurricane Dorian, reading and interacting with the school children, and playing a friendly game of basketball with the Royal Bahamas Defence Force.

The USS BAINBRIDGE is best known from her role in rescuing CAPT Phillips of the MAERSK ALABAMA from pirates in 2009.  During the 2019 deployment to the Mediterranean Sea, the Arabian Sea and the Arabian Gulf, the ship escorted many U.S.-flagged merchant vessels during times of heightened tensions in the region and rescued 21 mariners from the Motor Tanker KOKUKA COURAGEOUS, which was attacked in the Gulf of Oman.