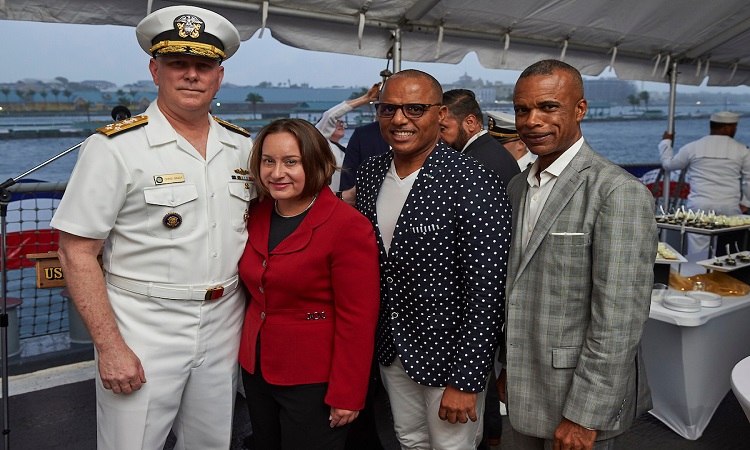 NASSAU, BAHAMAS – The commander of U.S. Fleet Forces arrived in Nassau, Bahamas, June 13 for a visit to engage in bilateral meetings to reinforce the importance of the strategic partnership between the U.S. and The Bahamas and the two countries’ longstanding commitment toward mutual security, promoting trade and cultural exchange.

“The United States and The Bahamas have long shared a strong relationship built on common values and interests, a commitment to democracy and the mutual defense of our countries,” said Grady. “My role as U.S. Northern Command’s Naval Component Commander (Naval Forces North) allows me to strengthen the relationship with one of our closest allies in the region and reaffirm our commitment to continued cooperation and collaboration, particularly in the areas of cooperative maritime defense and crime prevention.”

As an investment in the cooperative defense of North America, the U.S. provided a maritime surveillance radar on the southern-most island of Great Inagua earlier this year and secured funding for three additional radars that that will network with existing assets to generate a significant increase to The Bahamas’ maritime surveillance capacity.

“This capability and capacity are critical to maritime security,” said Grady. “The new radar significantly increases the Royal Bahamas Defense Force’s ability to detect illicit smuggling and trafficking in the Bahamas.”

Over the last several months, Naval Forces North and the RBDF participated in a number of subject-matter-expert exchanges focused on enhancing command and control, staff organization, codifying Maritime Operations Center practices and the RBDF’s ability to conduct intelligence-driven operations.

“We certainly support RBDF’s mission to become a multi-mission maritime organization,” said Grady. “We look forward to working together and learning from each other as we expand our two countries’ naval cooperation.”

The Bahamas has allowed the U.S. Navy the ability to conduct unique undersea testing and evaluation capabilities since 1959 at AUTEC, the U.S. Navy facility on Andros Island. In 2017, the U.S. and The Bahamas renewed its five-year agreement for the continued use of AUTEC.

“We are extremely appreciative of the support the Bahamas provides for this facility,” said Grady. “It’s truly a unique capability that directly supports our fleet training program and our ability to sustain readiness.”

Stout arrived in Nassau June 12 for a routine port visit. In addition to the on-board reception, Stout crewmembers also participated in community relations projects and experienced the local culture.