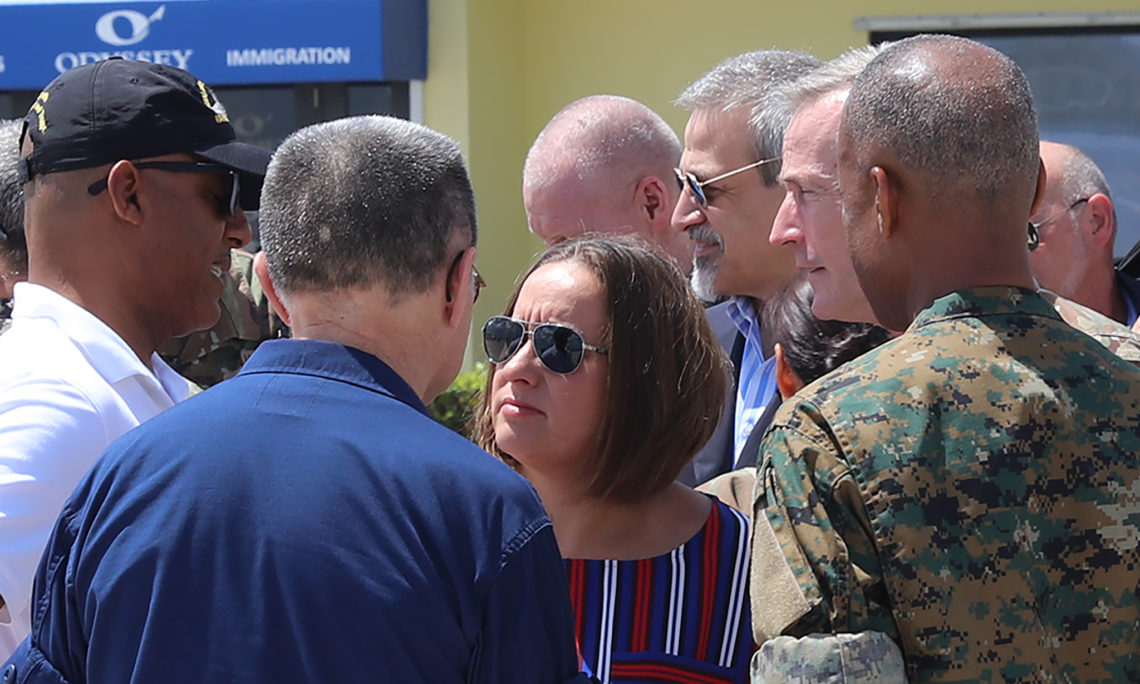 Minister of National Security Marvin Dames, and Royal Bahamas Defence Force Commodore Tellis Bethel, conducted assessment overflights of some of the affected areas in the northern Bahamas in order to refine disaster relief needs.  The group also landed in Freeport, Grand Bahama to meet with the U.S. Air Force’s team conducting an assessment of the Grand Bahama International Airport’s runway as part of a larger U.S. government effort to help bring the airport’s operations back online.

Chargé Bowers reiterated that the U.S. government is “working hand-in-hand in partnership with the Bahamian government. We are communicating nearly every minute with different parts of the government under the leadership of Prime Minister Minnis, as well as the National Emergency Management Agency.” The Chargé also thanked General O’Shaughnessy for his invaluable support, and Admiral Jones for the tireless work of the U.S. Coast Guard in relief efforts during the past week.

Following the aerial assessment, they discussed the most critical needs in the area and how to provide relief and assistance as swiftly and safely as possible.  General O’Shaughnessy reaffirmed that U.S. Northern Command, in support of USAID-led humanitarian response activities, will provide airlift and logistics.  The U.S. government is working diligently and at the highest levels with its Bahamian partners to provide relief and assistance to those in need in the northern Bahamas.

This announcement is the latest example of the U.S. commitment to helping the people of The Bahamas after this devastating storm.  The efforts of U.S. Northern Command are supplementing the multiple U.S. government agencies providing immediate support to Hurricane Dorian relief efforts in The Bahamas. USAID, the lead agency for international disaster response, has a team of 89 people, including 57 Search and Rescue personnel, in addition to supplying more than 47 metric tons to help an estimated 44,000 people.

The heroic efforts of the U.S. Coast Guard and CBP have saved over two hundred lives.  The United States, in support of its Bahamian partners, continues to help the populations affected by Hurricane Dorian.