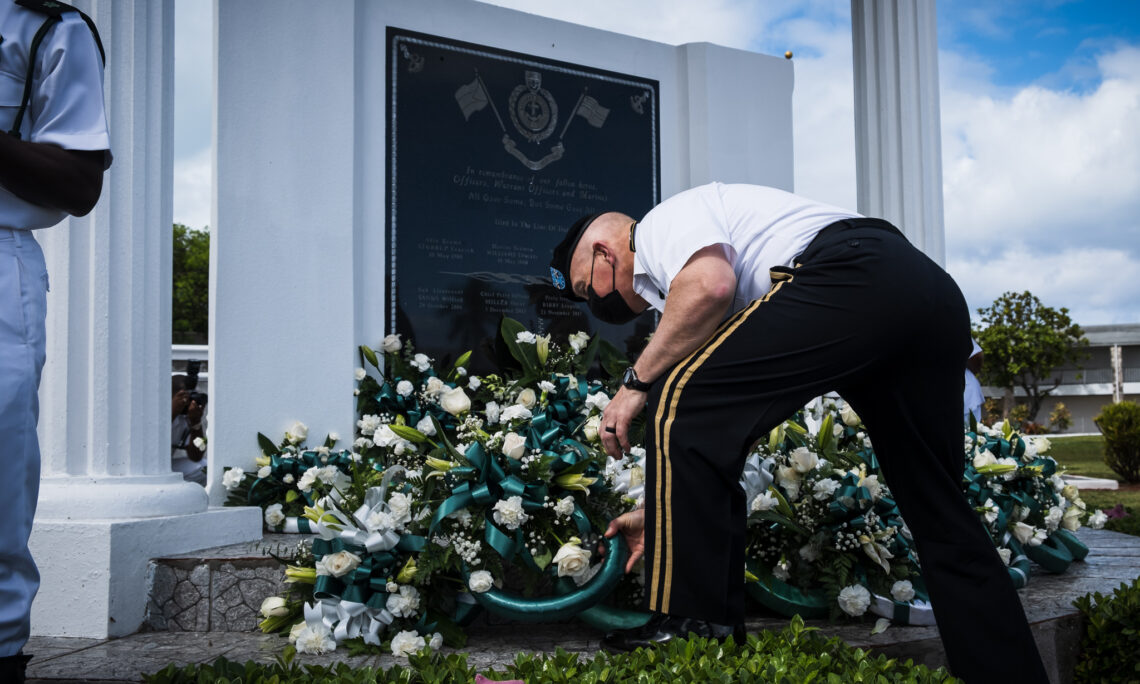 On Tuesday, May 10, U.S. Chargé d’Affaires Usha E. Pitts and Major General Christopher Callahan of the Rhode Island National Guard joined Acting Prime Minister the Honourable Chester Cooper, Minister of National Security the Honourable Wayne Munroe, and the Commander Defence Force Commodore Dr. Raymond King at the Coral Harbour base in Nassau to commemorate the sinking of HMBS Flamingo off the coast of The Bahamas on May 10, 1980.

Chargé Pitts and Major General Callahan also joined Acting PM Cooper, other dignitaries, and the families and loved ones of the fallen marines, and laid wreaths on the site of HMBS Flamingo Memorial Park at Coral Harbour Base in honor of the four young Bahamian Marines who gave their lives for their country 42 years ago: Fenrick Stirrup, Austin Smith, David Tucker, and Edward Williams. It was the first time U.S. representatives had the honor of laying wreaths at the memorial.

Major General Callahan also had the honor of presenting Commodore King with a recently passed Resolution whereby the State of Rhode Island officially commemorated May 10th, 2022, as “HMBS FLAMINGO Day of Remembrance.” The Rhode Island National Guard is the longstanding U.S. State Partner of the Royal Bahamas Defence Force, and this gesture is yet another symbol of the enduring friendship between the United States and The Bahamas.

As part of Major General Callahan’s visit, he also discussed with National Security Minister Munroe and Commodore King enhancing women’s participation within the Royal Bahamas Defence Force and the future of enlisted leadership professional development. Advancing these lines of effort promises to further strengthen the ability of the Royal Bahamas Defence Force to serve the Bahamian people and protect their homeland.

Major General Callahan also had the opportunity to meet with Minister of State in the Office of the Prime Minister with responsibility for disaster preparedness, the Honourable Myles LaRoda; the Permanent Secretary assigned to disaster preparedness, Mr. Carl Smith; and NEMA Director Captain Stephen Russell. In anticipation of the start of the 2022 hurricane season, they discussed the Rhode Island National Guard’s anticipated support in working with the Royal Bahamas Defence Force’s Disaster and Crisis Risk Management Units to better prepare for hurricanes and other forms of natural disasters.