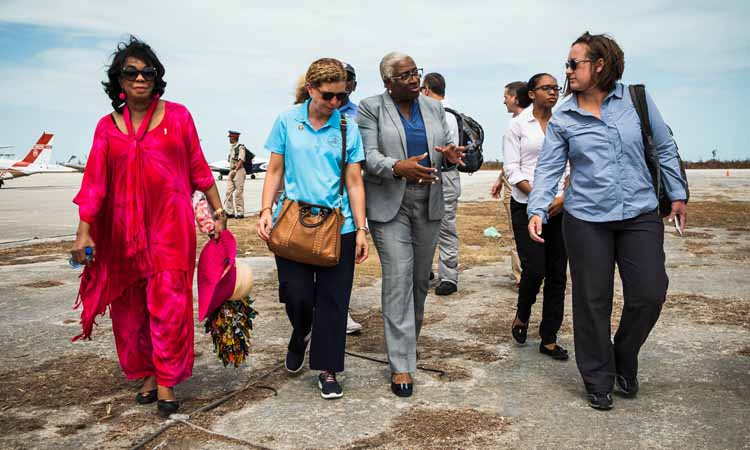 Chargé d’Affaires Stephanie Bowers welcomed to The Bahamas the visit of a bipartisan U.S. Congressional delegation led by Congresswoman Debbie Wasserman-Schultz from September 30- October 1.  U.S. Agency for International Development (USAID) Administrator Mark Green joined the delegation which met with the Prime Minister of The Bahamas, the Most Honorable Dr. Hubert Minnis, and Foreign Minister Darren Henfield before visiting the United States’ humanitarian operations in response to Hurricane Dorian in the affected areas of Grand Bahama and Abaco.

During the visit, USAID Administrator Green announced $7.5 million in additional funding for relief efforts in The Bahamas.  This includes additional support for Samaritan’s Purse and its field hospital in Grand Bahama, which has already treated over 2,000 patients, as well as additional support for shelter, water, sanitation, and hygiene activities including debris removal and infrastructure repairs to sewage systems.  The additional funding reaffirms U.S. support for the people of The Bahamas as they recover from Hurricane Dorian and brings the total support from the U.S. government to The Bahamas to nearly $34 million dollars since the storm struck. The U.S. government remains the largest humanitarian donor to the response.

While in Nassau, the delegation also met with U.S. Embassy staff, U.S. Coast Guard District 7 Commander Rear Admiral Jones, and members of USAID’s Disaster Assistance Response Team (DART), which deployed to The Bahamas to coordinate the U.S. government’s response to Hurricane Dorian in support of the Bahamian government.

In Abaco, the delegation met with USAID implementing partners and other NGOs working to provide vital assistance to meet the acute humanitarian needs of those affected by the hurricane.  These humanitarian groups have been on the ground since the hurricane struck to provide emergency food assistance, shelter, water, sanitation, and hygiene, and other support.  The delegation also visited The Bahamas’ National Emergency Management Agency’s emergency operations center that has served as the main coordination hub for the humanitarian response.  Prior to departing the island, the delegation traveled to The Mudd and Pigeon Pea areas to see firsthand the level of destruction caused by Hurricane Dorian.

Hurricane Dorian made landfall in the northern Bahamas four weeks ago as a category 5 storm, the strongest to ever hit the country.