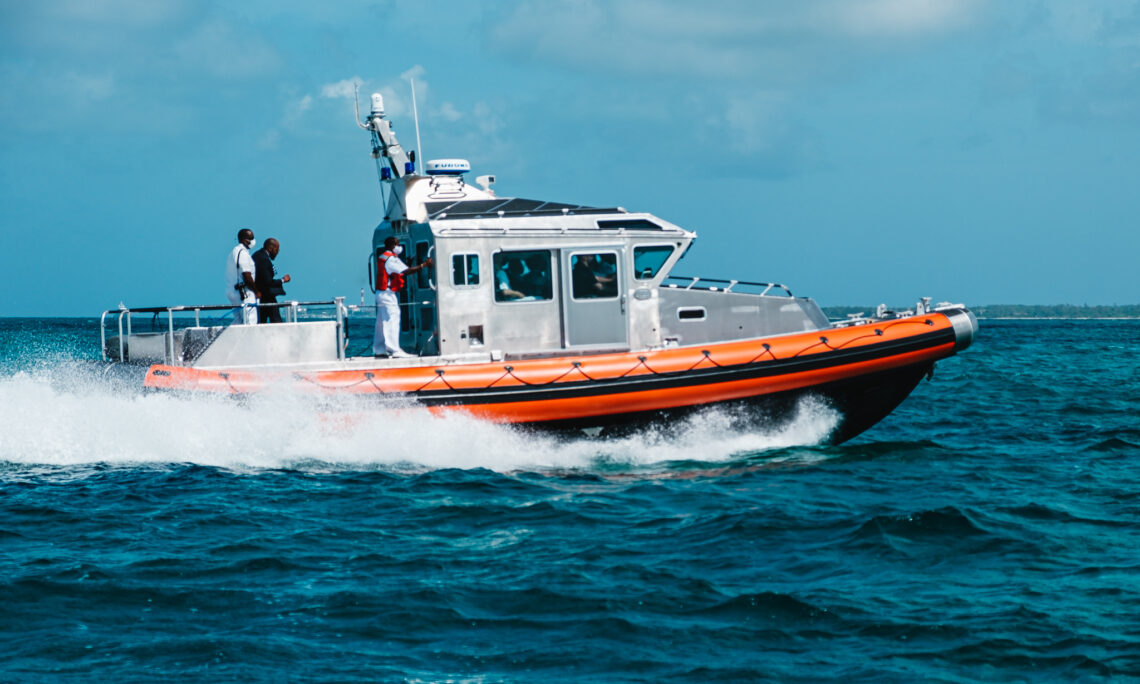 A 44-foot SAFE boat donated to the RBDF by U.S. Northern Command, demonstrating its maneuvering capabilities and top speed of 36 knots, just off the coast of New Providence, near the RBDF Headquarters at Coral Harbour Base | June 22, 2021; Nassau, The Bahamas. (Photo credit: US Embassy Nassau)

On June 22, the United States government continued to demonstrate its commitment to shared security and safety of The Bahamas and the United States, donating three high-speed SAFE boats, radio communications equipment, and biometrics equipment to the Royal Bahamas Defence Force (RBDF)—for a total value of about $5.9 million dollars. The handover took place at RBDF Headquarters at Coral Harbour Base, and further solidifies the robust security partnership between the U.S. and the Bahamas.

Upon officially delivering the donation. Chargé d’Affaires Usha E. Pitts noted that “we’re here celebrating a long and lasting partnership.” Chargé Pitts noted that, “your [The Bahamas’] security is our security, and vice versa,” and emphasized that “we and The Bahamas have a shared history, shared values, and we both enjoy the fruits of democracy.”

Minister of National Security Marvin Dames, Royal Bahamas Defence Force (RBDF) Commodore Raymond King and other Bahamian officials were on hand to receive and formally thank their U.S. partners for the equipment.

“Today’s donation is a tangible testament to our partnership. It illustrates how fundamentally important citizen safety and security is to our two nations. Truly, we are all in this together,” said Rear Adm. Cheever. “We hope this equipment will facilitate greater security for all and serve as a reminder of our enduring partnership.”

The donation includes two 44′ SAFE boats and one 33’ SAFE boat, all of which are primarily used for open-ocean interdiction.  Additional equipment includes long-range communications for patrol vessels as well as land communication systems, Harris radios and spare parts to augment the RBDF’s existing HF/VHF Harris radio inventory.  Another Land Mobile Radio (a trunked radio system that allows inter-island communication) was part of the donation.  Currently, there is a Land Mobile Radio set up between Great Inagua and New Providence.  This system will also be made available on the islands of Abaco and Grand Bahama.