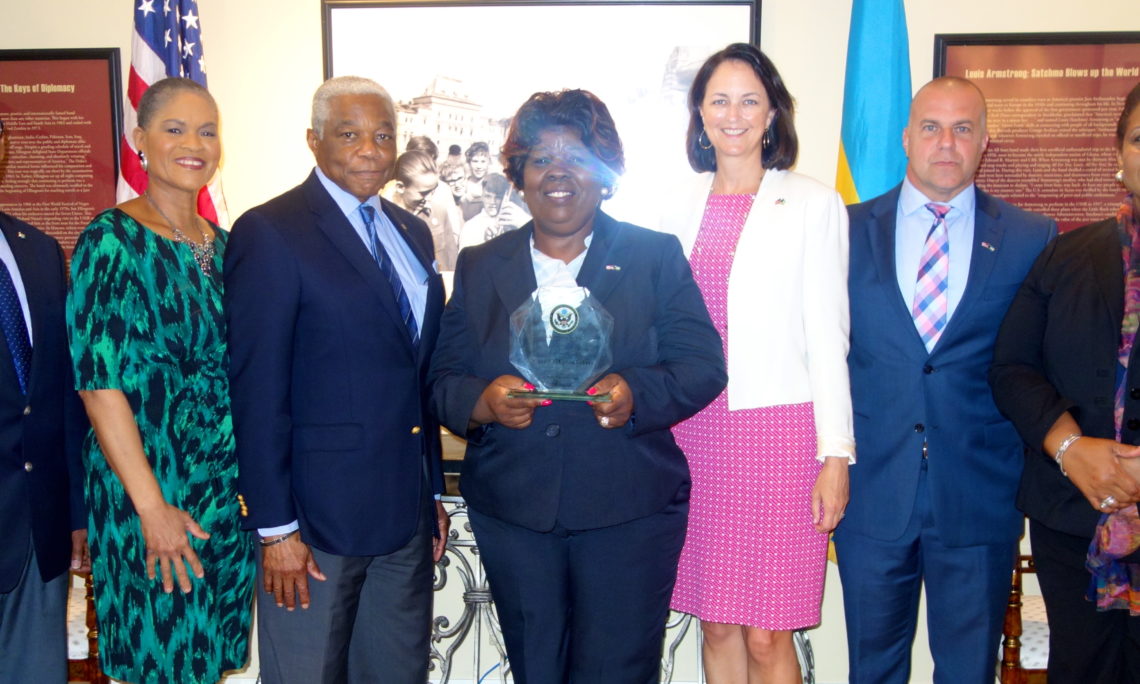 This year’s honoree, Sgt. Sullivan has served on the RBPF for the past 33 years and is recognized as a pioneer in leading the way for women within this still male-dominated profession.  Her efforts have been instrumental in opening doors for her female colleagues, and ensuring they receive the same training and benefits as their male counterparts.  In addition to serving as a mentor for women police officers in The Bahamas, Sgt. Sullivan has been a strong advocate on the need for more law enforcement attention to domestic violence, as well as an educator within the community on the dangers of drugs.  In 1992, Sgt. Sullivan received the Gallantry Medal, the RBPF’s highest honor.  She also has the unfortunate distinction of being the first woman police officer ever shot in the line of duty in The Bahamas.  The incident occurred in January 1988.

In her remarks, Chargé Johnson noted the significance of International Women’s Day, a day set aside to honor women who continue to strive to achieve justice and equality for all.

“These women show us what is possible when women and girls stand up for the rights and freedoms of not just themselves, but also those around them.” She added, “The particular details and circumstances of each of these women differ, but they are linked together by their exceptional devotion and leadership in advocating for human rights, women’s equality, and social progress, sometimes at great personal sacrifice and danger to themselves and those that they love.”

The State Department initiated the International Woman of Courage Awards in 2007 under Secretary of State Condoleezza Rice to honor and celebrate women globally who have exemplified exceptional courage and leadership.  Each year, American embassies around the world celebrate the brave and heroic women who create positive change in their countries and communities.

Former recipients of U.S. Embassy Nassau’s Woman of Courage award include Ms. Marva Jervis, for over 30 years a tireless champion for individuals living with HIV/AIDS;  Ms. Sheila Culmer, for a lifetime of advocacy on behalf of people with disabilities; Ms. Andrea Archer, for educating and helping teenage mothers; Ms. A. Missouri Sherman-Peter, for her long and exemplary career in the Bahamian foreign and civil services; the Honorable Janet Bostwick, for her inspirational role in the women’s labor movement; Dr. Sandra Dean Patterson, who was recognized in 2007 and 2011 for her accomplishments at The Crisis Centre; and Ms. Rosa Mae Bain, for her dedication to HIV/AIDS research.