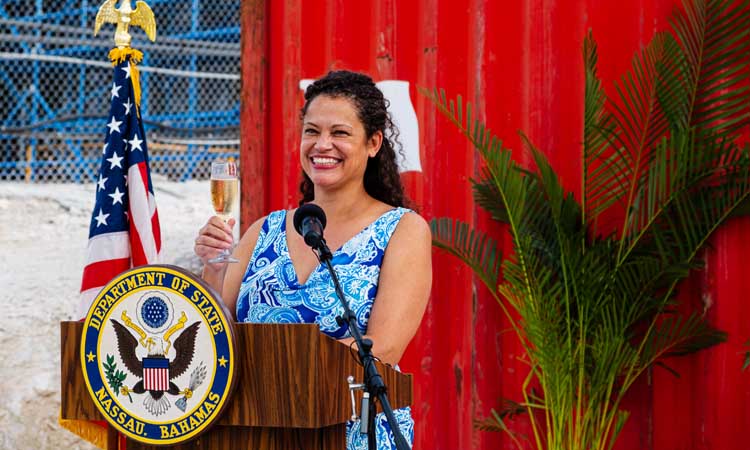 U.S. Chargé d’Affaires leads her guests in a toast to the enduring partnership between the United States and The Bahamas.

On the evening of October 8, the United States’ diplomatic mission to The Bahamas celebrated the completion of the physical structure of the new U.S. Embassy building being constructed in the heart of downtown Nassau—on the corner of Shirley and East Streets.

“The United States is here for The Bahamas, and that is really what this building is all about,” said U.S. Chargé d’Affaires and the host for the evening, Ms. Usha E. Pitts. During her remarks Chargé Pitts commented on the enduring strength of the U.S.-Bahamas relationship—sustained by shared values and common interests—and noted that The Bahamas “is known in my government as a young but vibrant nation; as a member of the sisterhood of democracies.”

The Embassy was graced by the presence of the Governor General of the Commonwealth of The Bahamas, His Excellency the Most Honourable Cornelius A. Smith; as well as Prime Minister, the Honourable Philip E. Davis; Chief Justice, the Honourable Sir Brian Moree; and Minister of Works and Utilities and Acting Minister of Foreign Affairs, the Honorable Alfred Sears; in addition to other high-ranking U.S. and Bahamian government officials, cabinet ministers, and close partners, at a socially-distanced outdoor event.

The Honourable Prime Minister, Philip Davis, reminded those gathered that the United States and The Bahamas “in so many ways […] are guests in each other’s homes, friends and neighbors in our communities, partners in trade, and allies on the international stage,” and noted that the new Embassy “symbolizes an understanding that the closeness between our nations is well worth a continuing investment.” Prime Minister Davis thanked the U.S. for their ongoing support during the COVID-19 pandemic—among other acts of goodwill—including the donation of over 128,000 Pfizer COVID-19 vaccine doses.

The ceremony marks the halfway point of the overall project and means “the building will go no higher, and the basic shape is complete,” said Overseas Building Operations Director Stephen Ziegenfuss. Director Ziegenfuss also thanked the Government of The Bahamas for their ongoing cooperation in support of the project over the past two years, including permits, work visas, and customs documents. Despite the challenges of the COVID-19 pandemic, the project is expected to be completed by the summer of 2023.

“Already, it stands as a lasting symbol of the enduring friendship between the United States and The Bahamas,” said Director of Caribbean Affairs Nan Fife. During the ceremony, the Embassy also raised onto the roof a tamarind tree—which will be planted on the Embassy grounds after construction is complete—in celebration of the Bahamian spirit and the shared roots and values that strengthen the relationship between the United States and The Bahamas.