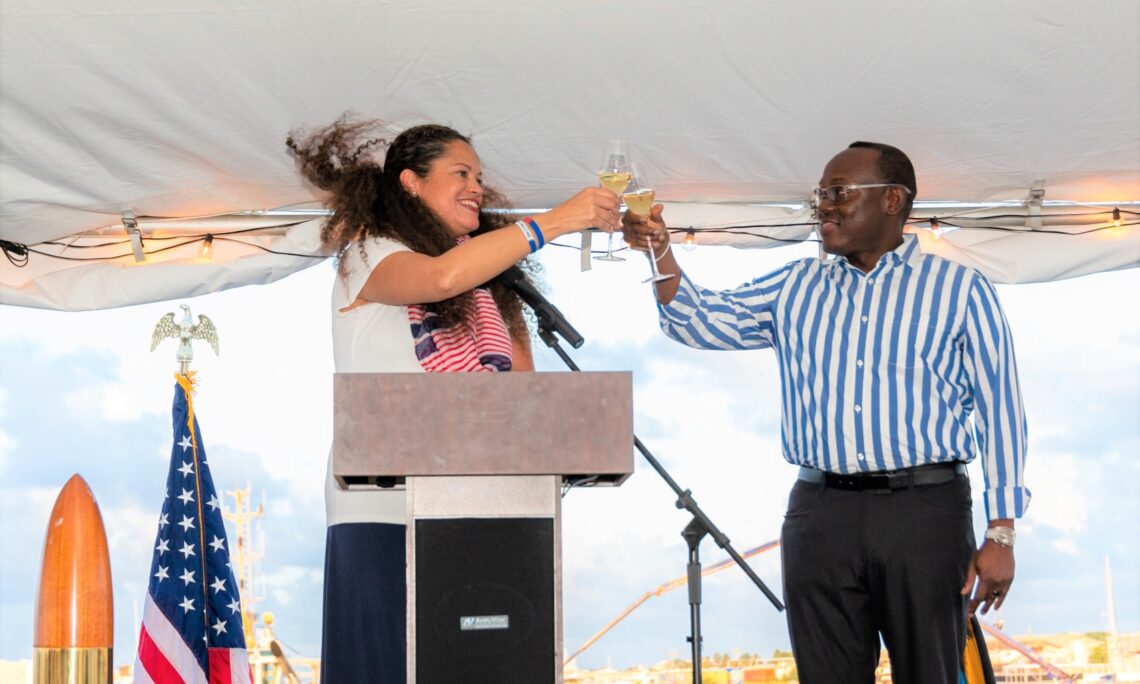 On July 1, 2022, the U.S. Embassy in Nassau celebrated the 246th Independence Day anniversary of the United States of America aboard the U.S. Navy Arleigh Burke-class guided missile destroyer, USS Lassen (DDG 82), while at port at Prince George Wharf in Nassau Harbour.

After a flag ceremony conducted by the U.S. Marine Corps Detachment at the Embassy, Deputy Prime Minister Cooper talked about the close friendship between the United States and The Bahamas.

During his remarks, Admiral Caudle observed that “Our common belief in the rule of law and democratic values are at the core of our relationship, which makes The Bahamas one of our closest partners in the Caribbean.” Admiral Caudle assured our guests of the United States’ commitment to a mutually beneficial relationship “at the highest levels.”

Upon giving closing remarks, Chargé Pitts celebrated The Bahamas’ embrace of democracy, “a system that allow citizens to speak openly about their values, decide what they stand for, and determine for themselves who they are.”

During his first visit to The Bahamas, Admiral Caudle also visited the Atlantic Underwater Test and Evaluation Center (AUTEC) on Andros Island and toured the Royal Bahamas Defence Force Headquarters at Coral Harbour. During meetings with Minister of National Security, the Honourable Wayne Munroe, and Commodore Dr. Raymond King, Commander Defence Force, the Admiral discussed how the United States and The Bahamas continue to cooperate on security, improve communications, expand our collective maritime domain awareness, and share intelligence.

From our assistance to those in need in the aftermath of Hurricane Dorian to our collaboration to combat the COVID-19 pandemic, the enduring partnership between the United States and The Bahamas is built upon shared values. These values undergird our ongoing cooperation on trade, migration, security, climate, and human rights. The anniversary of U.S. Independence gave Americans and Bahamians an opportunity to celebrate our shared values and close partnership aboard USS Lassen (DDG 82).

A generous spirit of community service was also on display before the event, as over 20 Sailors from USS Lassen (DDG 82)—alongside 10 Soldiers and pilots from the Rhode Island National Guard—spent the day volunteering at All Saints Camp on New Providence. All Saints Camp provides services and shelter for persons with HIV/AIDS and other disabilities and illnesses in The Bahamas. The servicemembers made repairs and upgrades to camp facilities, including the kitchen, gazebo, and other common spaces. In addition, U.S. Northern Command donated supplies totaling over $6,000, including small kitchen appliances and bed linens, through the Bahamian Ministry of Social Services and Urban Development. The Rhode Island National Guard Adjutant General, Major General Christopher P. Callahan, volunteered alongside the Sailors and Soldiers before attending the reception onboard USS Lassen (DDG 82) later that evening.

Many Bahamians are familiar with port visits by U.S. Navy ships, which customarily use their port visit as an opportunity to conduct humanitarian outreach and volunteer at local organizations. During their stay, Sailors experience the beauty of The Bahamas while enjoying a few days of shore leave.