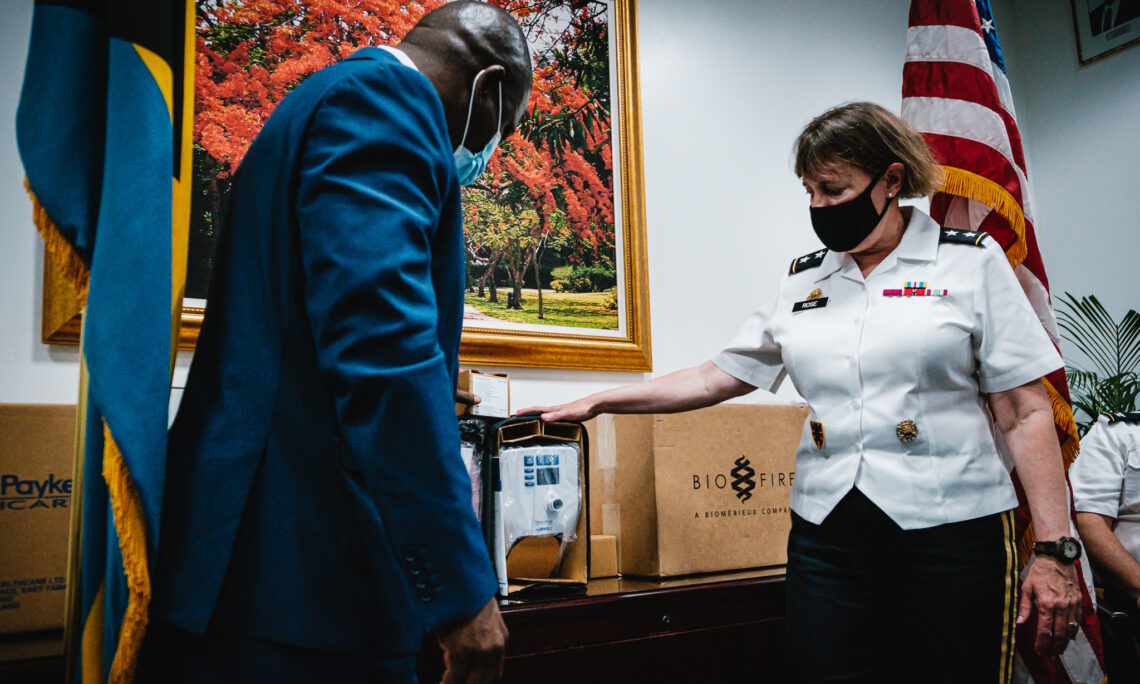 Major General Michelle Rose (right) demonstrates one of 20 total AIRVO respirators being donated to the Ministry of Health, to Minister of Health Renward Wells | June 23, 2021; Nassau, The Bahamas.

On June 23, 2021, The Bahamas officially received $500,000 in additional public health assistance form the United States. A high-level U.S. delegation delivered a broad range of medical equipment to assist The Bahamas Ministry of Health (MoH), and also visited the offices of the National Emergency Management Agency (NEMA). The donation demonstrates the continued commitment by the United States government to supporting The Bahamas in the ongoing fight against COVID-19, as well as disaster response.

Minister of Health, the Honourable Renward Wells, received the donation on behalf of The Bahamas, consisting of ten AIRVO respirators for the treatment of respiratory illnesses, with an additional ten respirators scheduled to arrive within the coming month.  The donation also included 2,560 Biofire test kits for use in the BioFire diagnostic machine which the U.S. provided to Princess Margaret Hospital earlier this year. Additional medical supplies, specialized vaccine coolers, and a field hospital augmentation unit will also provide valuable assistance in The Bahamas’ response to COVID-19.

Earlier in the day, the delegation also visited the offices of the National Emergency Management Agency (NEMA) on Gladstone Road to meet with the Minister of Disaster Preparedness, Management, and Reconstruction (MDPMR), the Honourable Pakeisha Parker-Edgecombe (accompanied by Permanent Secretary for MDPMR Carl Smith, and NEMA Director Captain Stephen Russell). U.S. Northern Command is in the process of securing additional communications equipment for the MDPMR and NEMA, as well as a third kitchen unit to supplement the $3.6 million modular sheltering system delivered in September of 2020, along with medical evacuation boats, emergency relief warehouse supplies, and materials and equipment for shelter renovations.

The delegation also toured the recently renovated command center at the NEMA offices, where U.S. Northern Command recently supported a series of natural disaster simulation exercises in preparation for the ongoing hurricane season.

The breadth and depth of the assistance delivered over the course of the past week (totaling nearly $6.5 million, in addition to the logistical support from the Rhode Island National Guard for vaccine distribution to the Family Islands) represents the enduring friendship and partnership between the United States and The Bahamas.