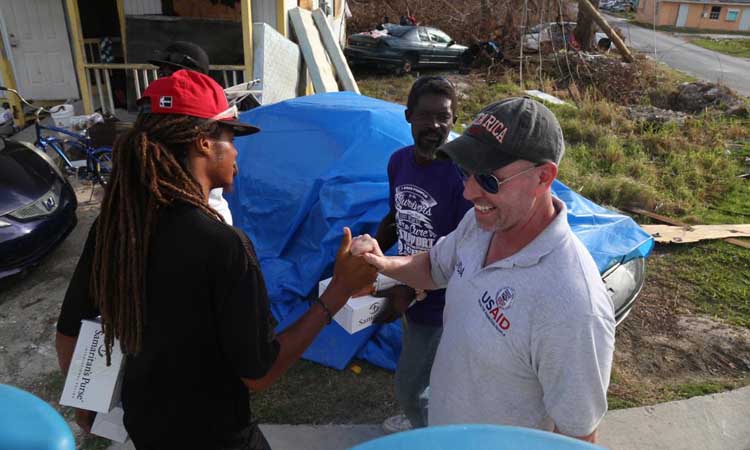 At a press conference in Washington, D.C., today U.S. Agency for International Development (USAID) Administrator Mark Green announced nearly $3.8 million in additional humanitarian assistance to help people in The Bahamas affected by Hurricane Dorian. This brings total U.S. funding for the response to more than $10 million, which includes logistics support from the U.S. Department of Defense.

“This is a difficult time for the people of The Bahamas. The journey ahead is a long one, but the United States will proudly stand with our neighbors,” added Green.

Green also said he has directed one of USAID’s most experienced officers to lead the U.S. government’s effort in The Bahamas. “I introduced to the Prime Minister USAID’s most senior humanitarian official for the Latin America and Caribbean region, Tim Callaghan, who I have appointed as the leader of the USAID response on the ground.”

At a separate press conference held by The Bahamas’ National Emergency Management Agency in Nassau September 12, Callaghan reiterated the United States’ commitment to supporting NEMA and the Bahamian government in recovering from the effects of Hurricane Dorian.

“Our focus 100 percent is to support the Government of The Bahamas. Our focus is to address immediate emergency needs. As those needs change, as time goes on, we will continue to bring in the appropriate experts to meet those needs, based on the requests from NEMA and the Government of The Bahamas,” Callaghan said. “We’re going to bring additional supplies in this weekend, donated to NEMA under Captain Russel. Again, how we’re working this is based on their vision and everything they’ve asked us to do.”

Callaghan went on to add that providing shelter materials continues to be a priority. “We have a shelter specialist here who has been working shelter issues and emergencies for over 30 years. At the request of the government, we are in the process of assigning someone here for the next few months to work with the government as they need for this important area.”

Callaghan also said USAID’s well-documented, closely monitored, and transparent delivery process ensures materials are reaching Bahamians in need. “We have teams on the ground tracking the material that we’ve brought in and donated to ensure they’re getting where they need to go and we’ll continue to do that.” Callaghan added, “We want to make sure it’s reaching what we call ‘the last mile,’ the people who need it most, as quickly as possible.”

On September 6th, USAID deployed an elite Disaster Assistance Response Team (DART) to lead the U.S. response to Hurricane Dorian in The Bahamas. This team includes over 100 people and includes trained search and rescue personnel to provide immediate lifesaving assistance.

To date, more than 47 metric tons of USAID supplies have arrived in The Bahamas to help an estimated 44,000 people. In addition, The Bahamas Red Cross, a USAID partner, is distributing USAID-funded relief items, including hygiene kits, portable stoves, and towels, to people affected by the hurricane. Additionally, USAID is supporting other non-governmental organizations on the ground like World Food Programme, and the International Federation of Red Cross and Red Crescent Societies.

The Fairfax County Search and Rescue Team, a USAID partner, has assessed more than 776 square miles of land, air, and sea, including more than 250 structural assessments conducted in Marsh Harbour and nearby areas.

U.S. military ships and helicopters have transported commodities and humanitarian personnel. Since Sept. 6, the military has transported about 119 metric tons of supplies and more than 250 responders to the affected areas.

The whole of the U.S. mission has also rescued over 400 people from affected areas since the response to Hurricane Dorian began.