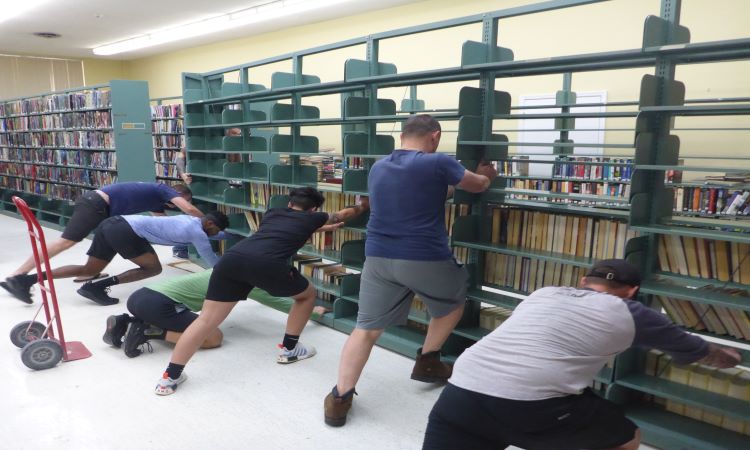 On February 28, crewmembers from the United States Coast Guard Cutter BERNARD C. WEBBER assisted the community of Grand Bahama Island which was severely impacted by Hurricane Dorian in September 2019.  At the Sir Charles Hayward Library in Freeport, the volunteers prepped the library to renovate the floor that was damaged by the hurricane storm surge.  The crew, along with four of the library’s staff members, moved approximately 6,000 books and relocated the entire shelving system to clear space to renovate the adult section of the library.  A key partner of the U.S. Embassy in Nassau, Sir Charles Hayward Library hosts the Academy for Women Entrepreneurs (AWE) Grand Bahama cohort and student visa presentations and town halls given by U.S. Embassy staff.

Another group of U.S. Coast Guard volunteers traveled to West End to assist staff and students at the West End Primary School.  The school received significant wind damage and surge from the Category Five storm.  The volunteers covered four classrooms that lost their roofs with tarp donated by USAID implementing partner Samaritan’s Purse in order to keep the classrooms protected from wind and rain.  The volunteers also sorted and organized hundreds of children’s books that were donated to schools in the West Grand Bahama school district by American second homeowners and other U.S.-based donors and organizations.