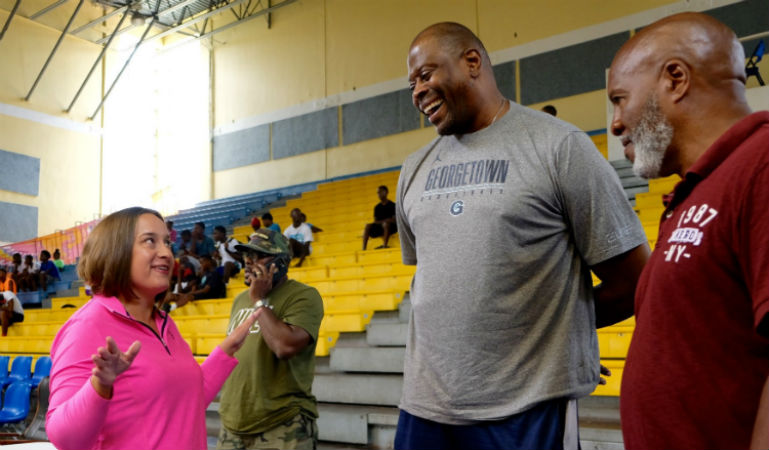 On August 13, 2019, U.S. Chargé d’Affaires Stephanie Bowers witnessed the power of sports to inspire young people, at the Kendal G.L. Isaacs Gymnasium in Nassau.  The renowned Georgetown University men’s basketball team, the Georgetown Hoyas and their coach, Patrick Ewing, are in Nassau until August 17 for a week-long summer training camp, which included a basketball clinic with dozens of Bahamian youth.

After watching the Hoyas practice, Chargé Bowers joined famed coach and NBA star Patrick Ewing and the Hoyas in engaging and encouraging about 50 young Bahamians, both girls and boys.  Chargé Bowers reminded the young players that practice and discipline are just as important in the classroom as they are on the basketball court, and that teamwork, discipline, and good sportsmanship will help them both on and off the court throughout their lives.  She joined coach Ewing in daring the youngsters to “dream big,” and to work hard to achieve those dreams.

The Hoyas received around 50 young girls and boys from several local basketball teams and summer camps, all of which share the goal of using sports to educate and empower young children and teenagers. The basketball clinic with the Hoyas was organized by Complete Sports Management, and included Youth Against Violence, Supreme Ballers, Baintown Youth Development, Providence Basketball, and Diamond Basketball Development Program.

The Hoyas are in Nassau playing a series of exhibition games against national and professional teams at the Atlantis Resort on Paradise Island between now and August 17.  This is their first trip under head coach Patrick Ewing, who made an impressive 10 consecutive NBA All-Star appearances during his 17-year professional career.