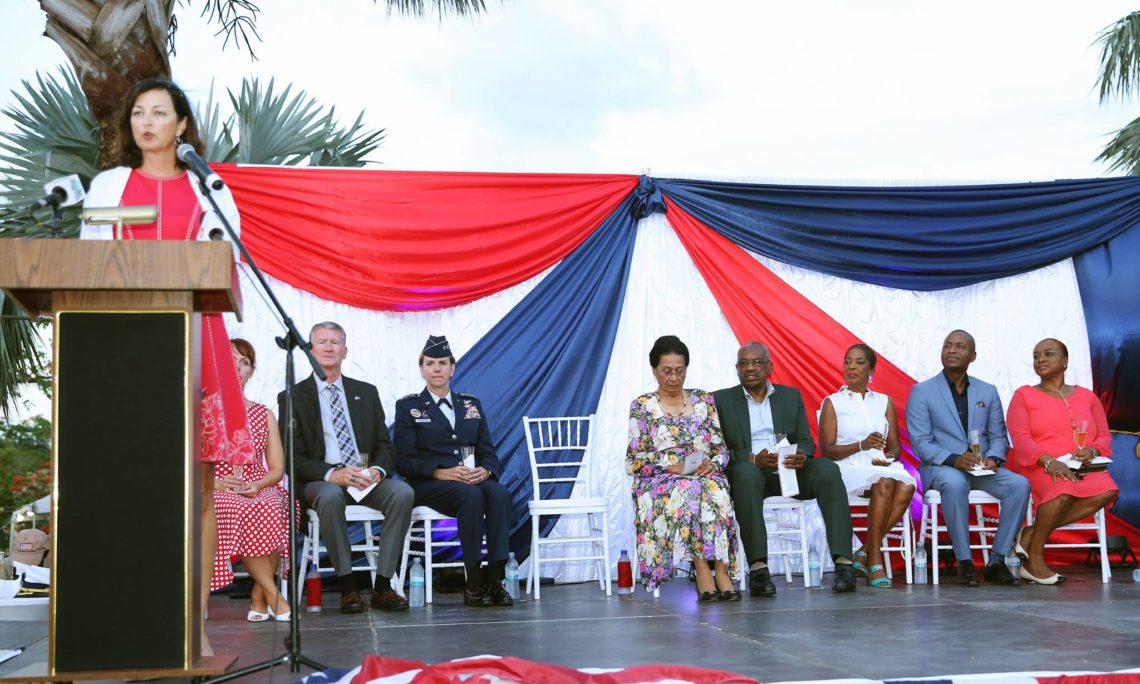 Good evening.  On behalf of the United States Mission to The Bahamas, I would like to thank you for joining us to mark the 241st anniversary of the Independence of the United States of America.   It is fitting that this year’s theme is a retrospective. While thinking about this night, I reflected upon the last three years and that this is the fourth Independence Day at which I have been representing my country in The Bahamas.  During that time, I have developed a deep appreciation for everything the Bahamas has to offer.

Not just the sun and the beautiful waters, but especially the wonderful Bahamian people, and the great partnership our two countries share.

I also reflected upon the tradition of U.S. Independence and what it means.  On July 4, 1776, our Founding Fathers signed the Declaration of Independence, committing their lives, and our lives, to a bold experiment.  They believed that a new country could be formed, not out of a common ethnic or religious history, but out of an idea – an idea of shared liberty and equal responsibility.

They started with an idea that government should be “by the people, for the people,” and believed that personal liberties should be valued, and freedom of religion and speech protected.  They believed that no matter what the country faced, the institutions of government would always be greater than any one individual.

These ideologies and freedoms that we enjoy, our men and women in uniform continue to protect.  They dedicate themselves to the defending the principles each of us holds so dear.  A shining example is my co-host tonight, General Lori Robinson, whose career has been dedicated to defending the doctrine our Founding Fathers set forth so long ago.

General, it is an honor to co-host this celebration with you for the second time.  I thank you for your service, and for your continued support for the safety and security of the United States, The Bahamas, and the region.

Each Independence Day, Americans from across the United States and around the world celebrate these values that tie us together, much as we are doing here tonight.

Bahamians share that spirit of freedom, demonstrated during elections here just a few weeks ago.  I witnessed first-hand Bahamians’ dedication to democracy and the example you set for the Caribbean and the world with a free, fair, and participatory process – including a remarkable nearly 90% voter turnout.

Your elections were a reminder that our two nations are united by a shared history, common values, and a mutual commitment to democracy and human rights.

Now is a time for us to mark the occasion of U.S.  Independence, take pride in our history, and look to the future with confidence.   It is also a time to offer our gratitude to all those who have sought to advance freedom and to lay the foundations for peace.

Please join me in raising our glasses to toast this celebration and the shared democratic values of the United States of America and the Commonwealth of The Bahamas.

May this be a symbol of our enduring friendship, and the beginning of the upcoming celebration of your own Independence.   May God bless the Commonwealth of The Bahamas, and God bless the United States of America.