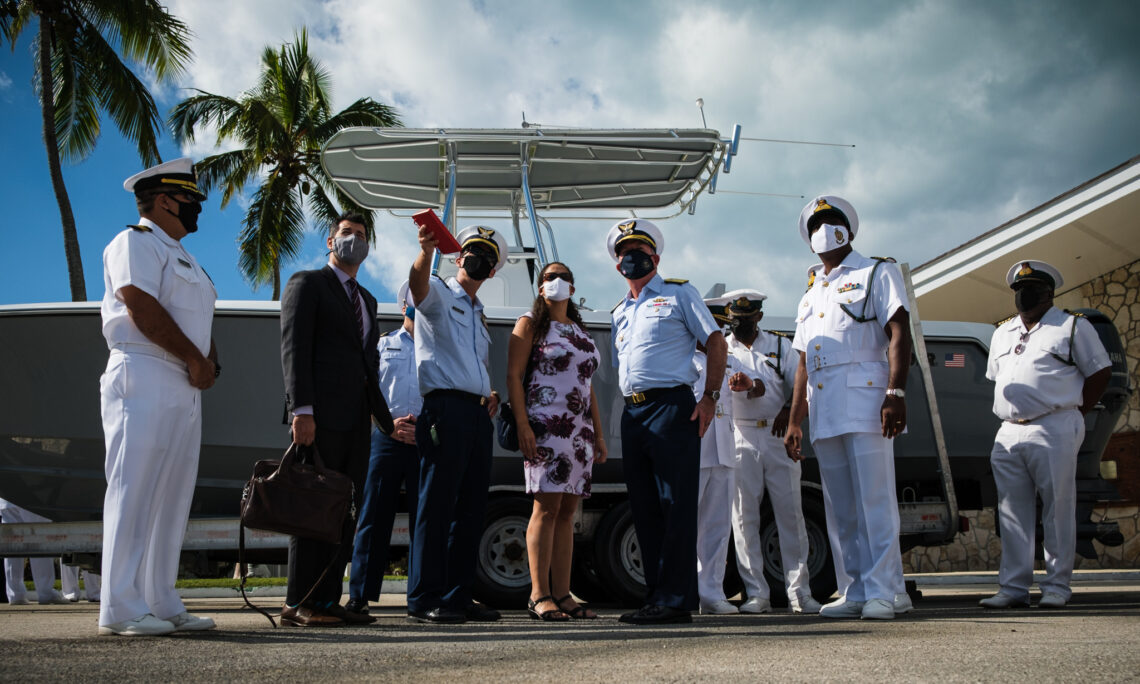 On November 30, Admiral Brendan McPherson, Seventh District Commander based in Miami, made his first official visit to The Bahamas to strengthen the bilateral maritime law enforcement partnership with the government of The Bahamas.

While on New Providence, U.S. Chargé d’Affaires Usha Pitts, accompanied by Admiral McPherson, officially delivered a 30-ft. Contender boat valued at approximately $200,000 to the Royal Bahamas Defence Force (RBDF) and the Government of The Bahamas, during an official dedication ceremony at the Coral Harbour base in Nassau. The U.S. officials were warmly received at Coral Harbour Base by Minister of National Security, the Honourable Wayne Munroe, and Commodore Defence Force, Dr. Raymond King.

The donated vessel has a fascinating backstory. In May of 2020, the U.S. Coast Guard, working with other law enforcement agencies and the National Oceanic Atmospheric Association (NOAA), stopped and boarded a 39-foot vessel off the Florida Keys. During the investigation, it was discovered that the owner had illegally poached hundreds of pounds of fish in Bahamian waters. Needless to say, he was in violation of numerous fishing laws and his catch was seized and transferred to NOAA representatives. Eventually, the accused pleaded guilty, and part of his sentencing was to donate his vessel to the RBDF to help stop future illegal, unreported, and unregulated fishing in Bahamas waters.

This case highlights just one facet of the remarkable partnership between the United States and The Bahamas.  The interdiction further illustrates the need for us to continue to improve our interoperability to uphold our laws, protect our environment, and to stop illegal fishing in our shared and international waters.

Upon delivery of the vessel, Admiral McPherson remarked, “It is my pleasure to dedicate this Contender to the Defence Force on behalf of the United States. I know this asset will be well-utilized toward future law enforcement interdictions and for search and rescue operations.”

In her remarks, Chargé Pitts emphasized how valuable the partnership between the United States and The Bahamas is, noting that it is one of the closest bilateral relationships she’s encountered in her entire diplomatic career.

Upon accepting the vessel on behalf of The Bahamas, Minister of National Security, the Honourable Wayne Monroe, expressed his gratitude for the boat and for the many other forms of assistance the United States has given and continues to give. Minister Monroe also met with the Admiral at his offices at the Ministry of National Security earlier in the day to discuss the bilateral security relationship.

The Admiral also met with Acting Prime Minister the Honourable Glenys Hanna-Martin first thing in the morning, to discuss the many areas of common interest and shared values between the United States and The Bahamas.

Admiral McPherson and Chargé Pitts are now traveling to the Turks and Caicos Islands to further strengthen the unique OPBAT (Operation Bahamas, Turks and Caicos) security partnership. OPBAT is a cooperative multi-agency international operation supporting The Bahamas and Turks & Caicos Islands to stop illicit drug smuggling through the region. It serves as an example of international cooperation at its best.