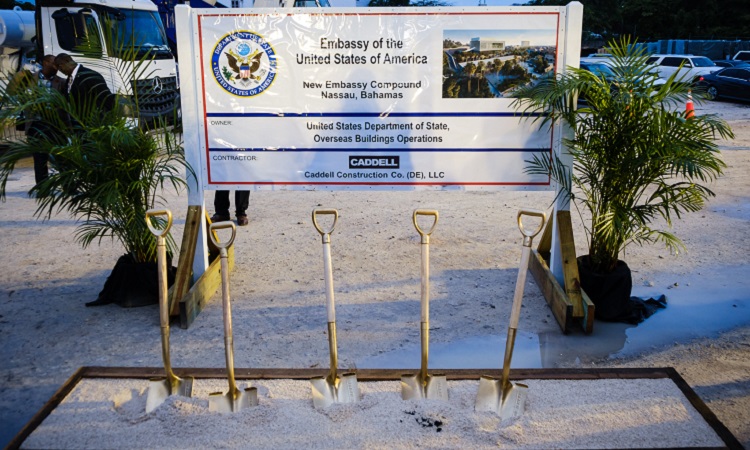 In a display of enduring friendship and emphasizing the importance of the bilateral relationship between the United States and The Bahamas, Prime Minister Hubert Minnis, Foreign Minister Darren Henfield, Chargé d’Affaires Stephanie Bowers, Director of the Bureau of Overseas Buildings Operations (OBO) Addison D. “Tad” Davis IV, and the American Chamber of Commerce in Nassau, as well as Bahamian and U.S. officials, broke ground today on the new U.S. Embassy campus in Nassau, The Bahamas.

In celebration of the groundbreaking, the U.S. Embassy and the American Chamber of Commerce in Nassau hosted a joint reception under the theme: “The Bahamas is Open for Business.”  The reception amplifies President Trump’s continued support of The Bahamian people in the wake of Hurricane Dorian, the strongest storm on record to make landfall in The Bahamas.

The new U.S. Embassy will provide a secure, modern, sustainable, and resilient platform for diplomacy.  It represents a significant jewel in the crown of downtown Nassau’s revitalization.  It will also employ approximately 160 local workers at the peak of construction activities.

Ennead Architects of New York, New York is the design architect for the project and Integrus Architecture of Spokane, Washington is the architect of record.  Caddell Construction of Montgomery, Alabama, is the construction contractor.  The project is expected to be completed in 2023.

Since the start of the Department’s Capital Security Construction Program in 1999, OBO has completed 157 new diplomatic facilities and has an additional 59 projects in design or under construction.

OBO provides safe, secure, functional, and resilient facilities that represent the U.S. government to the host nation and support our staff in the achievement of U.S. foreign policy objectives.  These facilities represent American values and the best in American architecture, design, engineering, technology, sustainability, art, culture, and construction execution.