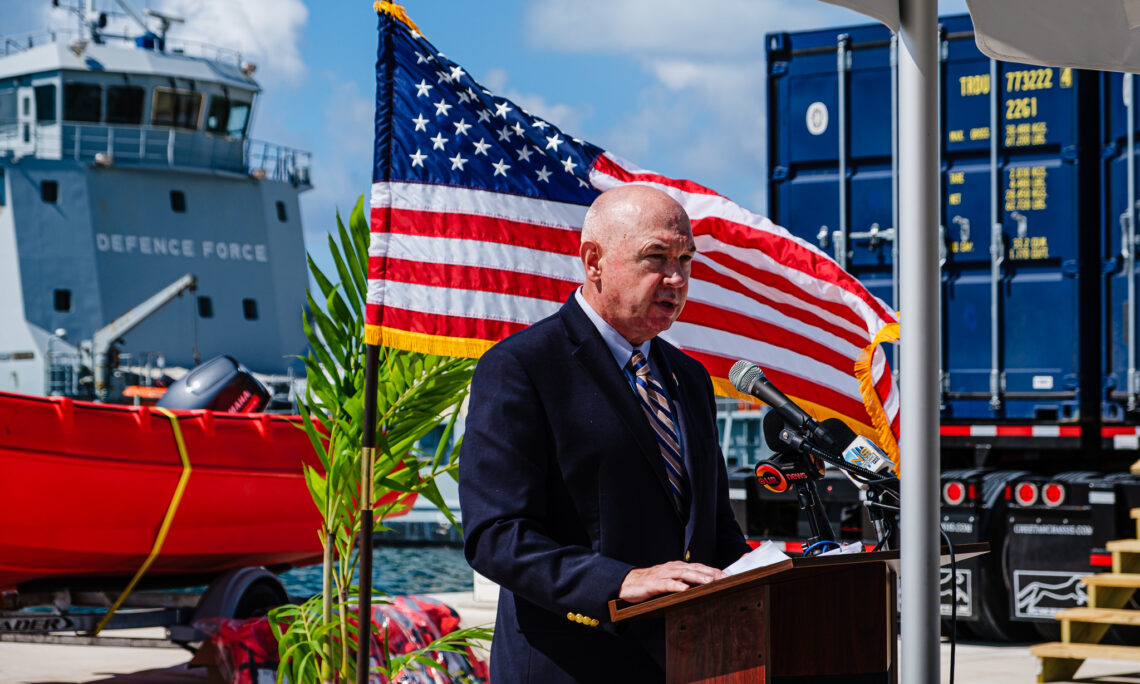 U.S. Chargé d'Affaires John McNamara gives remarks upon delivering a $3.6 million dollar donation of modular shelters, rescue boats, and construction equipment to The Bahamas; in the background: one of the red state-of-the-art rescue boats, and the U.S., Bahamian, and NEMA flags | September 18, 2020

Remarks (as prepared) for Delivery of $3.6 Million Donation
of Modular Shelters, Rescue Boats, and Construction Supplies

It is hard to believe that just over a year ago, Hurricane Dorian—the most powerful storm to ever make landfall in this country—was battering the shores of Abaco and Grand Bahama. I am new to The Bahamas, but in my short time here I have heard many of my colleagues and Bahamian counterparts describe the terrible destructive power of that storm. Many of you witnessed the devastation first-hand or know someone who’s life was upended by Dorian as it destroyed homes, totaled cars, and took precious lives.

My conversations with Bahamians have revealed something else that emerged from Dorian’s wake. I have heard many stories of the hope and the courage of the Bahamian people, and examples of the strength of the special and steadfast partnership between the United States and The Bahamas.

Our two countries are close in more ways than one. We are, of course close neighbors, with The Bahamas and the state of Florida less than 50 miles apart at their closest point. But there is much more than simply geographic proximity that draws the United States and The Bahamas close to one another, including the many friendships and family ties that bind our nations together. Ours is a partnership built by our respect for human rights, our shared and cherished democratic values, and our mutual respect for the rule of law. We believe in the innate rights and dignity of all individuals, in every part of the globe.

The value of our strong partnership was made plain during and after Hurricane Dorian. Then Chargé d’Affaires Stephanie Bowers worked tirelessly with Bahamian officials and NGOs in service of those who were in Dorian’s terrible path. For weeks Ms. Bowers and our team at the U.S. Embassy worked around the clock, bringing the U.S. government’s resources to bear in helping the people of The Bahamas. The U.S. Coast Guard used their search and rescue expertise to save over 400 lives. USAID brought in a team of over a hundred specialists at the height of the assistance effort; to help assess the damage; contributed $25 million out of a total of $34 million dollars in U.S. government assistance thus far; and coordinate the U.S. government’s overall emergency response. The Drug Enforcement Administration provided the helicopters that allowed senior Bahamian officials to survey the destruction and begin planning recovery efforts immediately after the storm. The Department of Defense brought in heavy lift helicopters and logistics support, helping to bring people, vehicles, and equipment to where they needed to be in order to do the most good.  In fact, we’re fortunate to have Commander Kevin Self with us today, who himself played a huge role in marshalling the resources of U.S. Northern Command to help the response effort. And the list of bi-national cooperation goes on, encompassing thousands of women and men from multiple U.S. government agencies and their skilled and dedicated Bahamian counterparts.

Today’s event represents that same enduring spirit of friendship and partnership between the United States and the Commonwealth of The Bahamas. It is a result of months of coordination and hard work between the U.S. Embassy and the government of The Bahamas, specifically the Embassy’s Office of Defense Cooperation, United States Northern Command, the Ministry of Disaster Preparedness, Management and Reconstruction, and the National Emergency Management Agency.

And so, on behalf of the U.S. government and the American people, the Embassy is proud to deliver $3.6 million dollars-worth of disaster response supplies to help our friends and partners in the Bahamian government and the wonderful Bahamian people, which we feel is especially important now, at the height of the most active Atlantic hurricane season in recorded history.

Permit me to provide a brief overview of key components of today’s donation.  First, behind you is a $3.5 million-dollar modular shelter system that can house 400 people, along with kitchen and bathroom facilities which can be deployed together or separately to respond to emergency needs. These units can quickly provide shelter to displaced citizens or provide rapid accommodation to disaster response personnel.

Earlier this month we also delivered twelve medical evacuation boats that response personnel can use to rescue Bahamian residents from storm surge and flood waters in the aftermath of a hurricane. The boats are already in Grand Bahama as we speak, and will be distributed in accordance with Bahamian government priorities among various locations throughout The Bahamas all of which have already received flood water rescue training from U.S. Northern Command.

Finally, today’s donation also includes construction materials to help repair 12 existing shelters on Grand Bahama that suffered damage during Hurricane Dorian. I have no doubt Minister Lewis, Captain Russell and their talented and hard-working teams will make very good use of all of these items as we continue to weather the 2020 hurricane season–together.

The months of close collaboration that made today’s donation possible demonstrate the true meaning of the unique partnership our two nations have shared for decades. Moreover, they add to the long list of cooperation between our two countries, despite the many challenges we’ve all faced in the past year. In the last month alone, the United States provided $750,000 dollars to The Bahamas to help in the fight against COVID-19. Over the next several months, the Bahamas Red Cross Society will use these funds to purchase PPE and other critical supplies for the Public Hospitals Authority, to provide hand-washing stations to select schools in New Providence, and to provide mental health services to medical professionals on the front lines of the pandemic. And just last week the U.S. Coast Guard, Royal Bahamas Defence Force, and Royal Bahamas Police Force worked together to rescue 12 people from a boat sinking off of Chub Cay and in another joint mission with the Drug Enforcement Administration destroyed an illegal marijuana crop of 1,000 plants on Andros island.

One again I would like to thank the Office of the Prime Minister, the Office of the Deputy Prime Minister, the Ministry of Disaster Preparedness, Management and Reconstruction, the Royal Bahamas Defence Force, and the National Emergency Management Agency, for working with us to help The Bahamas become ever more resilient in the face of natural disasters.

And thank you all again for coming today to see for yourselves the value of the enduring partnership between the United States and The Bahamas. Though the future may be uncertain, there is one thing that is crystal clear to me today: we are all in this together.

And in the lexicon of our Bahamian partners, let’s move forward, upward, onward, together. Thank you very much.