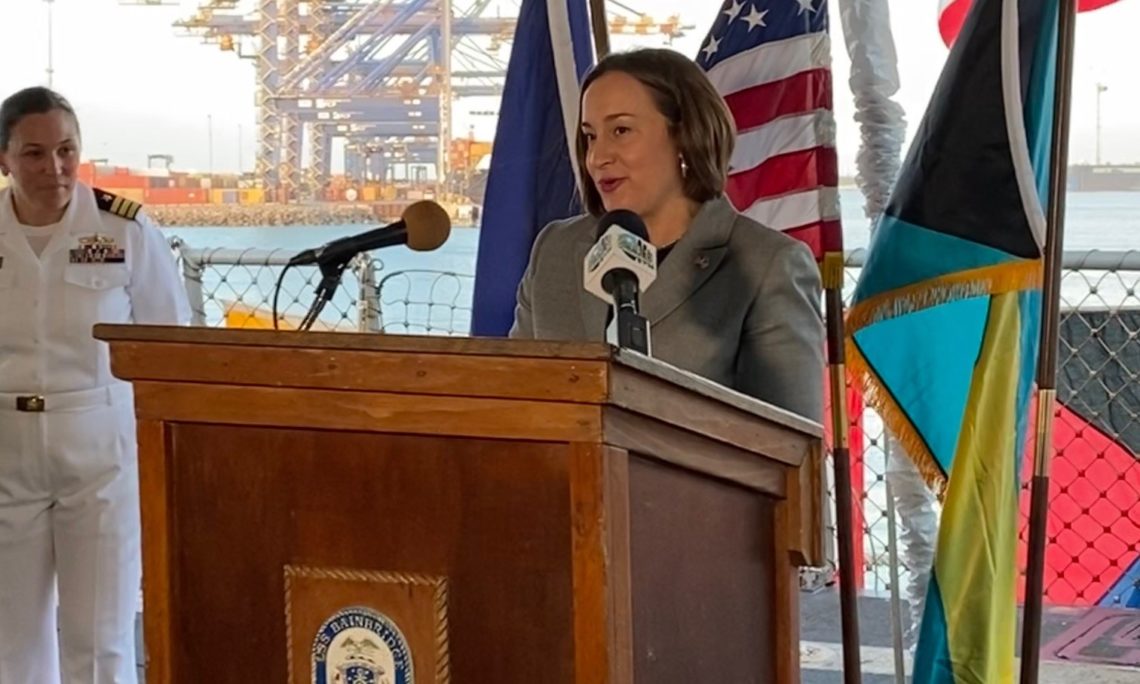 It is such an honor to be aboard the USS BAINBRIDGE with all of you. Protocol having been established, I would still like to acknowledge Deputy Prime Minister Turnquest and Mrs. Turnquest, Minister Thompson, and Minister Lewis and Mrs. Lewis – thank you for joining us this evening.

And my sincerest thanks to Commander Kathryn Devine and the brave women and men of the BAINBRIDGE for hosting us.

Commander Devine’s career spans 19 years with various sea and shore assignments. She has served onboard six Navy vessels including destroyers, cruisers, and patrol craft.  She is a graduate of both the Naval Command and Staff College and the College of Naval Warfare.  She reported to the USS BAINBRIDGE as Executive Officer in June 2017 and took command in May 2019.  Thank you, Commander, for bringing your magnificent ship to The Bahamas.

The USS Bainbridge’s visit, like the visit of her sister ships before her, is further testament to the strength of the bilateral relationship between the United States and The Bahamas, and to our historically close economic, cultural, and social ties.

It is fitting that the first visit by a U.S. Navy ship to The Bahamas since the immediate aftermath of Hurricane Dorian is occurring in Freeport.  Even in the midst of hardship and tragedy, and working closely to rescue storm victims and begin the long, painful process of recovery, the United States and The Bahamas emerged with an even stronger friendship.

I was pleased to tour Grand Bahama earlier today and see how much progress has been made, yet we all know that there is still a long road ahead.  The United States continues to stand side-by-side with The Bahamas as the reconstruction effort continues.  As just one example, USAID has provided enough funding for Samaritan’s Purse to continue its work, such as its water, sanitation, health, and shelter programs well into 2020.

The U.S. government and U.S. private sector commitment to Grand Bahama extends well beyond Hurricane Dorian recovery.  We were pleased to learn that the Royal Caribbean cruise line has agreed to purchase the Grand Lucayan complex, and that Carnival Cruise Line is proceeding with its plans for a new cruise terminal on Grand Bahama.

For our part, the U.S. embassy just launched the Academy for Women Entrepreneurs, or AWE, here in Freeport with 40 participants from across the island.  AWE is a 13-week course to empower women to meet their full potential for economic participation.  We look forward to even more opportunities to strengthen the Embassy’s ties to Grand Bahama.

For its part, while in Freeport, the USS BAINBRIDGE crew continued a long-standing U.S. Navy tradition of giving back to the community it visits.  Men and women from the ship went to six different primary schools to paint classrooms damaged by Hurricane Dorian and spent time with the children of Grand Bahama.

Please join me in thanking Commander Devine and the women and men of the USS BAINBRIDGE for their hospitality tonight and the opportunity to celebrate the enduring partnership between the United States of America and the Commonwealth of The Bahamas.