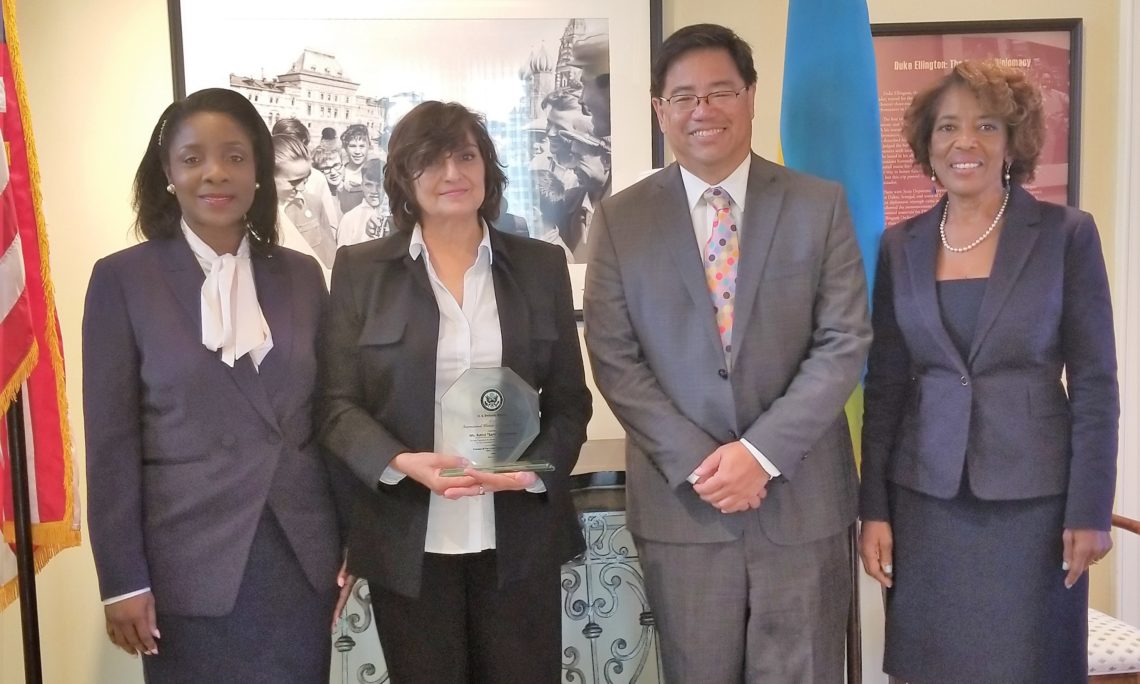 On March 8, recognized globally as International Women’s Day, the U.S. Embassy hosted a reception at Liberty Overlook in honor of Fotini “Sam” Tsavousis-Duncombe, Embassy Nassau’s 2018 nominee for the Secretary of State’s Award for the International Women of Courage (WOC).  A cross-section of key contacts attended the event, including the wife of Prime Minister Dr. Hubert Minnis, Mrs. Patricia Minnis, Minister of Social Services and Urban Development, The Hon. Lanisha Rolle, President of the Senate, Senator The Hon. Katherine Forbes-Smith, and other government officials.

The Secretary’s Award for International Women of Courage was established in 2007 to honor women around the globe who exemplify exceptional courage and leadership in advocating for human rights, women’s equality, and social progress.  Embassy Nassau has traditionally hosted a breakfast in March in honor of our local nominee and Women’s History Month.

Post nominated Fotini “Sam” Tsavousis-Duncombe for the 2018 International Women of Courage Award in recognition of her dedication to addressing environmental problems in The Bahamas over the past 27 years.  Ms. Duncombe began her life-long mission to champion the call for environmental awareness, education, and protection in The Bahamas in 1990.  She, along with her husband Tony Duncombe and Catherine Brisson, established reEarth, the environmental watchdog of The Bahamas. reEarth through campaigns, protests and education has increased public awareness of environmental issues among the Bahamian public.  It played a key role in the development of the Clifton Heritage Park and the Clifton Heritage Authority in order to protect the area of New Providence Island from real estate development and environmental ruin.

In January 2012, Ms. Duncombe created a blueprint for the government’s National Environmental Plan for The Bahamas, “A Living Future.” This document outlines a plan for environmental laws intended to protect, preserve, conserve and sustain the Bahama Islands into the future.  She is a part of the Save the Bays environmental group, and continues the work she began at Clifton Heritage Park.  She remains steadfast in her efforts to preserve the unique marine environment throughout The Bahamas.